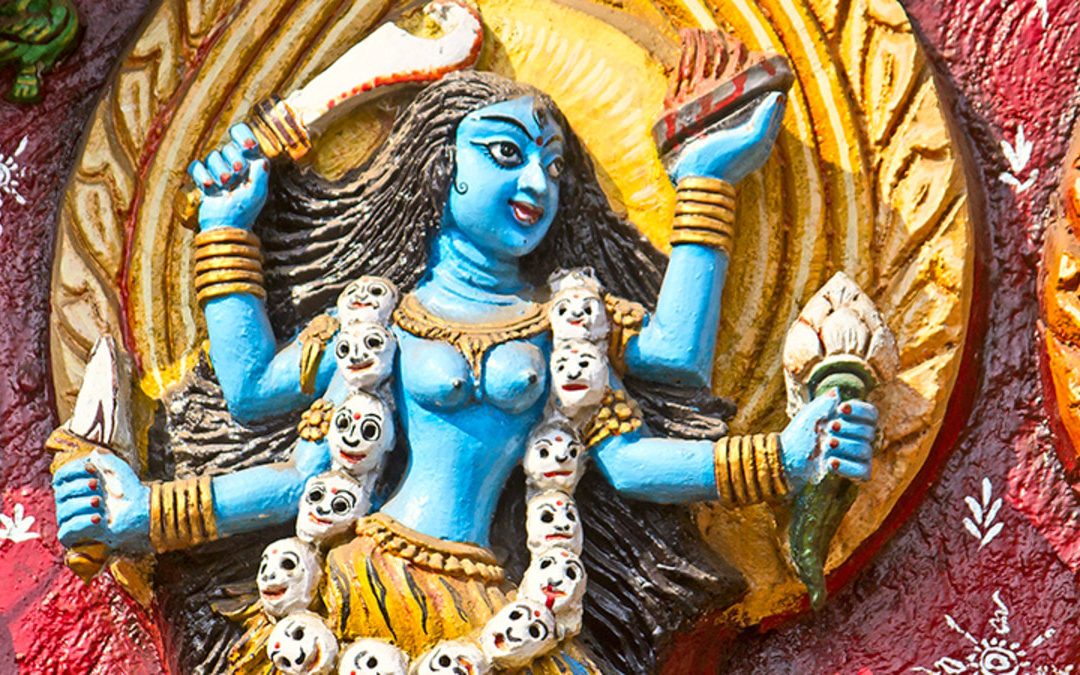 Source:www.goddess.ws(This website is devoted to the discovery of God in the feminine form – the Goddess; the Divine Mother. Also included in this website are pages that explore many of the more common forms of the Goddess)
“Kali comes from the Sanskrit root word Kalwhich means time. There is nothing that escapes the all-consuming march of time. In Tibetan Buddhism Her counterpart is male with the name Kala. Mother Kali is the most misunderstood of the Hindu goddesses…
It is partly correct to say Kali is a goddess of death but She brings the death of the ego as the illusory self-centered view of reality. Nowhere in the Hindu stories is She seen killing anything but demons nor is She associated specifically with the process of human dying like the Hindu god Yama (who really is the god of death). It is true that both Kali and Shiva are said to inhabit cremation grounds and devotees often go to these places to meditate. This is not to worship death but rather it is to overcome the I-am-the-body idea by reinforcing the awareness that the body is a temporary condition. Shiva and Kali are said to inhabit these places because it is our attachment to the body that gives rise to the ego. Shiva and Kali grant liberation by removing the illusion of the ego. Thus we are the eternal I AM and not the body. This is underscored by the scene of the cremation grounds.

Of all the forms of Devi, She is the most compassionate because She provides mokshaor liberation to Her children. She is the counterpart of Shiva the destroyer. They are the destroyers of unreality. The ego sees Mother Kali and trembles with fear because the ego sees in Her its own eventual demise. A person who is attached to his or her ego will not be receptive to Mother Kali and she will appear in a fearsome form. A mature soul who engages in spiritual practice to remove the illusion of the ego sees Mother Kali as very sweet, affectionate, and overflowing with incomprehensible love for Her children.

Ma Kali wears a garland of skulls and a skirt of dismembered arms because the ego arises out of identification with the body. In truth we are beings of spirit and not flesh. So liberation can only proceed when our attachment to the body ends. Thus the garland and skirt are trophies worn by Her to symbolize having liberated Her children from attachment to the limited body. She holds a sword and a freshly severed head dripping blood. As the story goes, this represents a great battle in which she destroyed the demon Raktabija. Her black skin represents the womb of the quantum unmanifest from which all of creation arises and into which all of creation will eventually dissolve. She is depicted as standing on Shiva who lays beneath Her with white skin (in contrast to Her black or sometimes dark blue skin). He has a blissful detached look. Shiva represents pure formless awareness sat-chit-ananda (being-consciousness-bliss) while She represents “form” eternally supported by the substratum of pure awareness.
By not understanding the story behind Mother Kali it is easy to misinterpret Her iconography. In the same way one could say that Christianity is a religion of death, destruction and cannibalism in which the practitioners drink the blood of Jesus and eat his flesh. Of course, we know this is not the proper understanding of the communion ritual.

Attaching the idea of sexuality to Mother Kali has no basis in Her at all. There is nothing that associates Her with sexuality in the Hindu stories. In fact it is just the opposite. She is one of the few Goddesses who is celibate practicing austerity and renunciation!”

The explanation of picture of Kali:

Source: www.goddess.ws(This website is devoted to the discovery of God in the feminine form – the Goddess; the Divine Mother. Also included in this website are pages that explore many of the more common forms of the Goddess)
“The pictorial representation of Mother Kali is, at first glance, strange and bizarre to the eyes and minds of westerners. Kali is the personification of that aspect of the Divine Mother that compassionately destroys the ego. To begin with, the concept of destroying the ego is not prevalent in western culture. In fact, most everything in our culture adores the ego. The concept of being innocent, helpless and childlike, depending on God alone and not our own clever cunning is all but lost. Jesus tells us that we must become like little children to enter the kingdom of heaven (Matthew 18:3).

Kali comes from the root Sanskrit word “kala” which means time. Tibetan Buddhism embraces a similar figure as Maha Kala though he is male in gender. In an academic sense Mother Kali is the primordial energy which animates space and is perceived by us as the linear sequence of events which we call time. Her skin is midnight blue, almost black, which represents the womb of existence. This is the quantum world of unformed potentials and probabilities, from which all phenomena continually arise and into which they continually disappear.

Her hair is long, black, disheveled and flowing freely depicting Her freedom from convention and the confines of conceptualization. Her eyes are open wide, eternally awake, blazing with the fire of infinite suns as an expression of Her indomitable intensity. She is standing, dancing, on the pure white chest of Lord Shiva who, as pure primal awareness, lays in a passive reclining position, peacefully reposed with his eyes half open in a state of bliss.

Kali is the dance of time as the endless creation and dissolution of the universe supported by Shiva who is absolutely pure formless awareness. He is the eternal witness of his consort’s divine theater. It is through Her that self-realization occurs as She is the perfect mirror, the infinite reflection of his formless nature.”

Her two right arms are raised benevolently with palms extended granting gifts of insight and wisdom to Her children. Her upper left arm holds the sword of enlightenment which delivers the blow of non-dual reality to the ego releasing the soul forever from the tyranny of deluded self-intoxication. In Her lower left hand, She holds the severed head of the ego. Identification with the body is what gives rise to the illusion of the “I” or ego. Thus, the seemingly gruesome presentation of a severed head depicts the most direct act of sublime compassion, which is bestowed by the Mother to Her devotees.
Mother Kali proudly wears a garland of skulls, which are reminiscent of Her many children whom She has liberated from the grip of the I-am-the-body delusion and the hypnotic tyranny of birth and death. These remnants of enlightenment are trophies of the fulfillment of human evolution which She prominently displays around Her neck in the same way that earthly mothers set their own grown children’s bronzed baby shoes on the fireplace mantle.”

“Name:Kali is so called because She devours Kala(time) and then resumes Her own dark formlessness. She is the embodiment of three gunas(qualities of nature): She creates with Her sattva guna(quality of goodness and purity), preserves with rajas(passion and activity), and destroys with tamas(ignorance and inertia).

Complexion:Her complexion is deep blue, like the sky. As the sky is limitless, so is She. From a distance one sees the ocean water as blue, but it is colorless and transparent when examined closely.

Crescent above the forehead:She is the giver of liberation.

Earrings:Images of two little babies hang from Her ears; this means that She favors childlike devotees.

Tongue:Kali’s white teeth symbolize sattva or serenity; Her red tongue, rajas, or activity; and Her drunkenness: tamas or inertia. The meaning: tamas can be conquered by rajas, and rajas by sattva.

Full breast:She is the nourisher of all beings.

Terrible form:She is the mother of the universe as well as the destroyer. When a mother spanks her child, it does not mean that she is cruel; she disciplines her child for its own good.

Necklace:It consist of fifty skulls that represent the fifty letters of the Sanskrit alphabet, the origin of sound. She is Shabda Brahman(Sound-Brahman), or Logos-the source of creation.

Two right arms:The upper right arm grants fearlessness, and the lower right arm offers boons. She protects Her children from danger, and She fulfills their desires.

Two left arms:She holds a sword with the upper left arm and a severed head with the lower. She can cut human bondage with the sword of knowledge, and She imparts wisdom to the head, the receptacle of supreme wisdom.

Naked form:She is called digambari, “clad in space.” She is infinite, so no finite dress can cover Her.

Waist:Kali’s waist is encircled with a girdle of severed human arms that represent action. All human actions and their results go to the Divine Mother. At the end of a cycle all souls merge with Kali; during creation they again evolve with their respective karmas.

Kali mantras with their meaning

Source: www.hindutsav.com (This website is about Hindu traditions and religion)
“Kali Ma is known as the preserve of Earth, but due to her destructive powers she is also known as “Dark Mother”. The name Kali means She, who is Beyond Time. She is considered as a berserk form of Durga/Parvati, who is consort of Lord Shiva. Kali Ma is simultaneously portrayed as the giver and destructor of life. However, in most of the interpretations she is portrayed as ferocious and evil. She is the mother of the world and the treasure-house of compassion. She is considered as the primordial mass from which all life arouse.
Here are some mantras to please Kali Ma:
This mantra will protect you from all the evil forces.

Om Kring Kalikaye Namah
This mantra is simple and transforms the devotee to pure consciousness.

Om Sri Maha Kalikayai Namaha
Only a few people use this mantra due to its purgative nature.

Om Klim Kalika-Yei Namaha
This mantra is believed to bring relief from all kinds of problems, no matter how much complex it is.

Extra tip: you can mention the parallel between the `Black Madonna` cult in Europe and Goddess Kali, e.g. in South Italy they celebrate the Black Madonna every year who came from the sea, she is also the patron saint of `roma` (gypsy) communities throughout Europe